Davivienda is a regional bank leader that operates in six countries (Colombia, Panama, Costa Rica, El Salvador, Honduras, and the United States). With over 49 years of experience in the Colombian market, Davivienda offers a wide range of financial services to individuals, SMEs, and corporate customers. The bank currently serves over 19,8 million customers through a network of 650 branches and more than 2.680 ATMs.

Davivienda has been in business for over 49 years. Formerly incorporated as Corporación de Ahorro y Vivienda in 1972 in Colombia, Davivienda is going through a steady and strong expansion process since 2005. 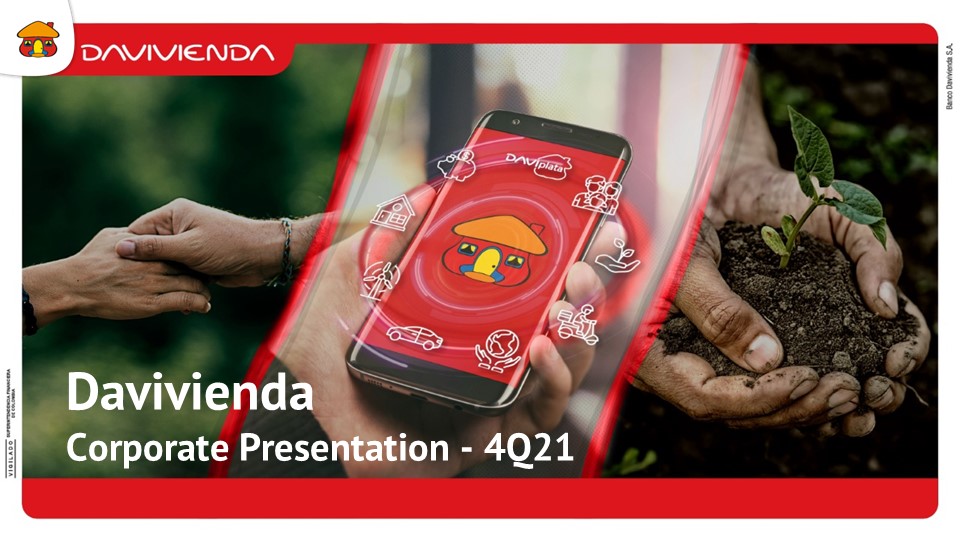 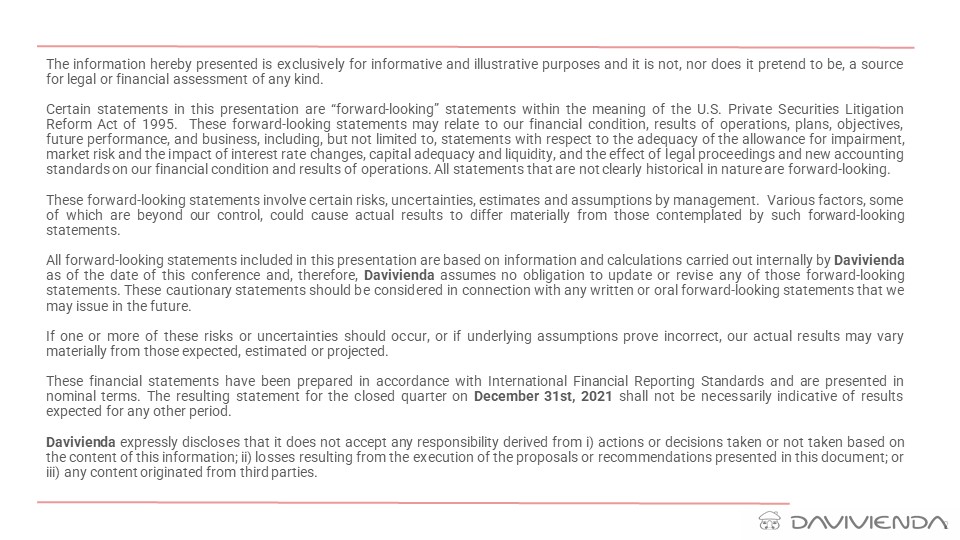 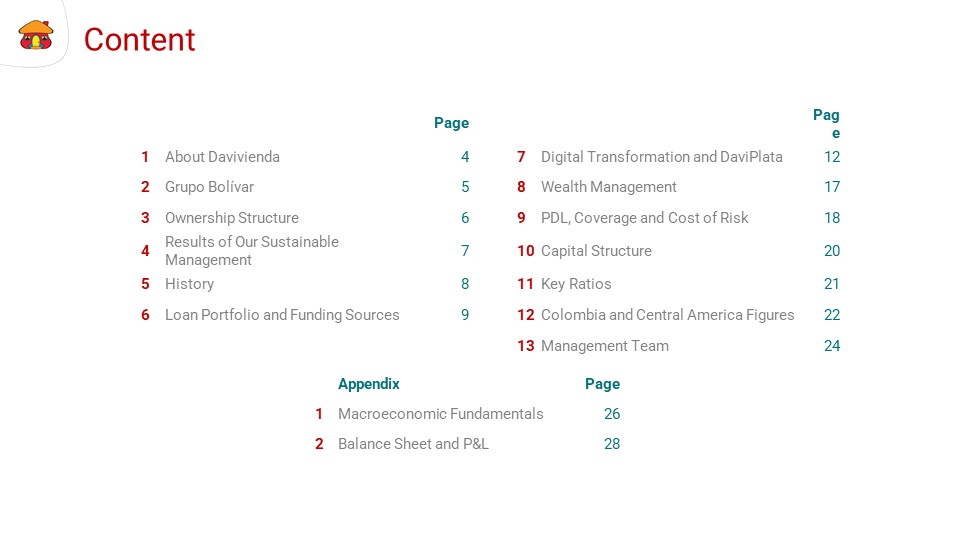 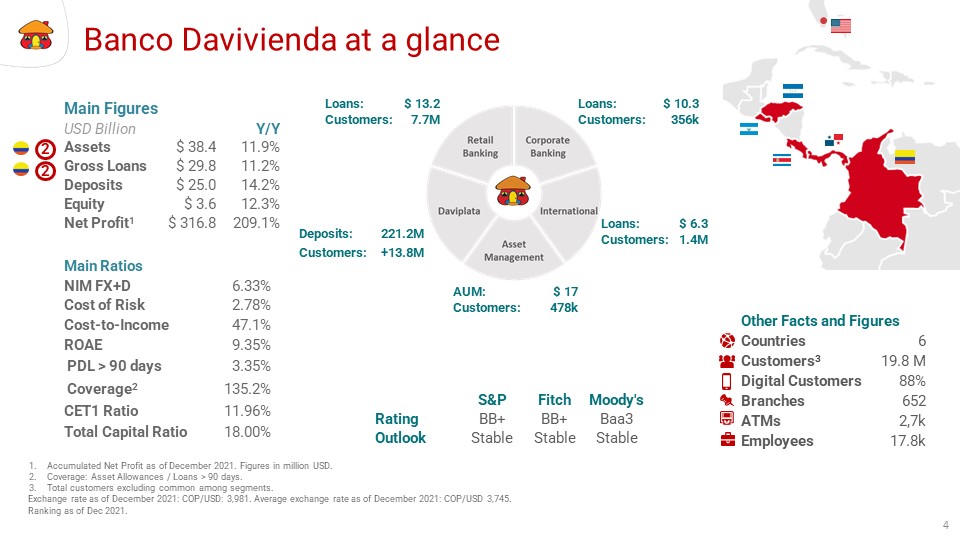 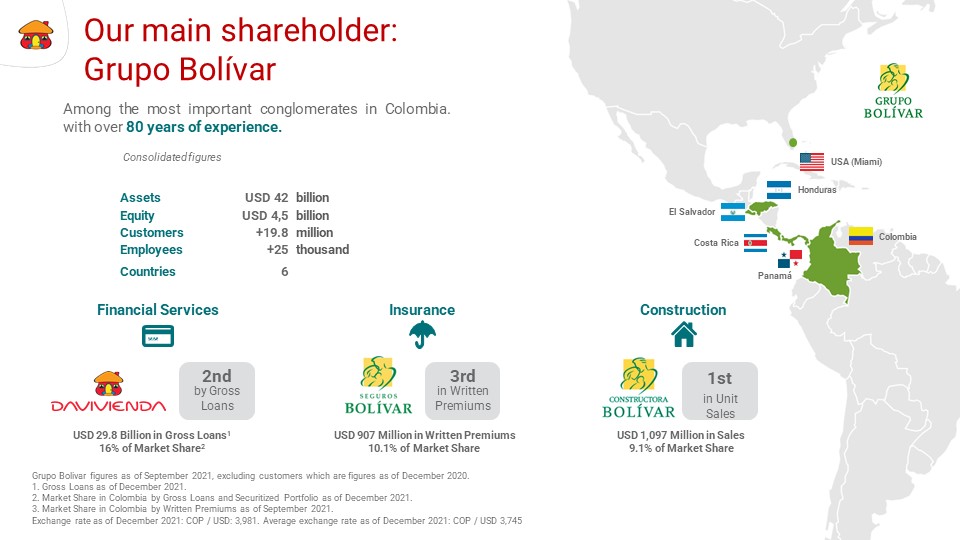 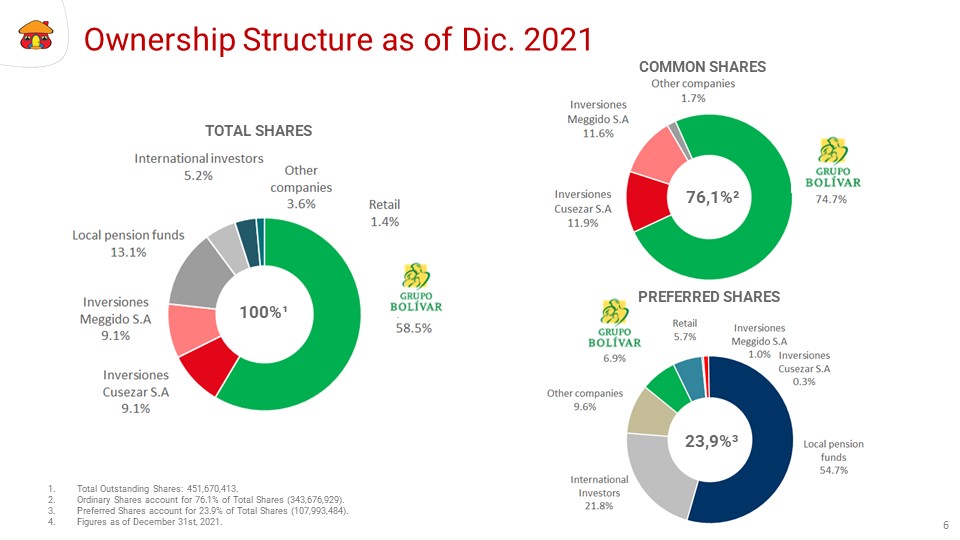 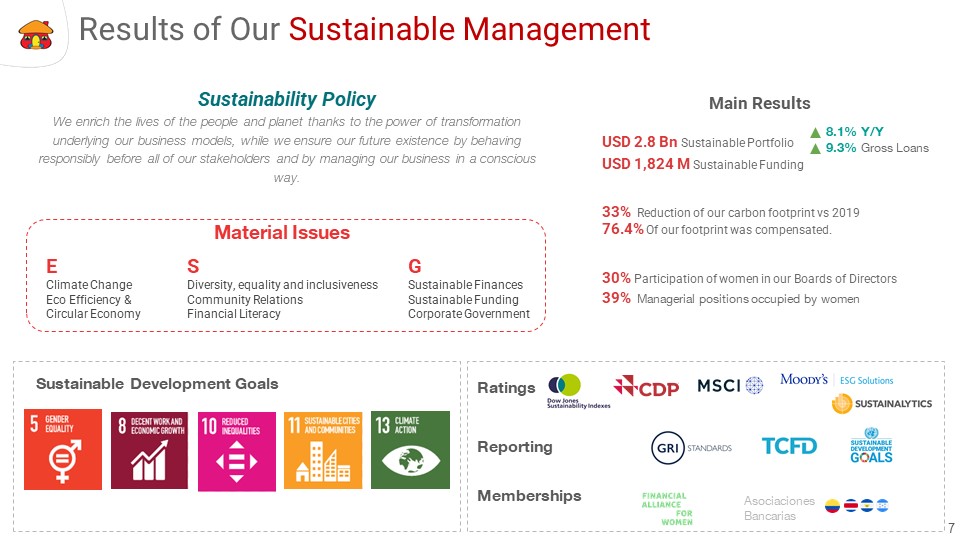 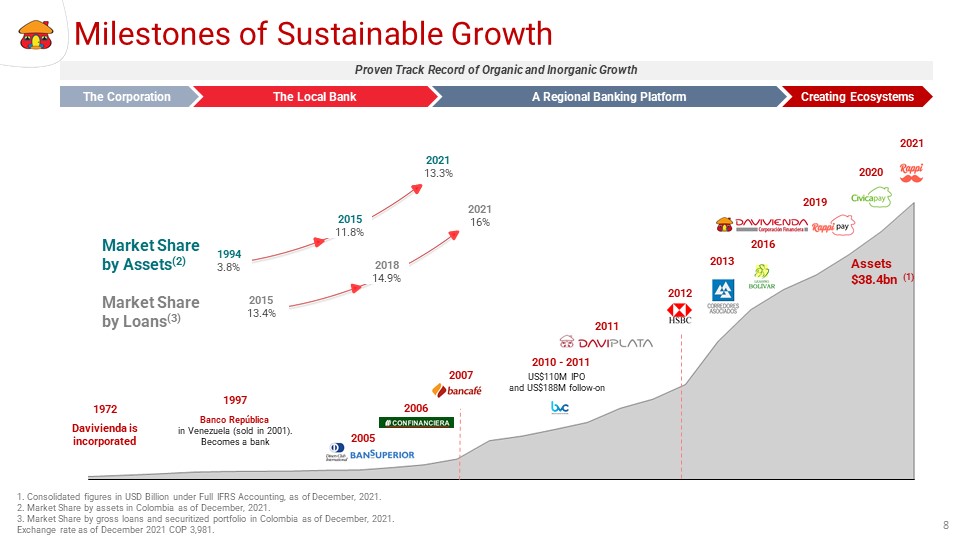 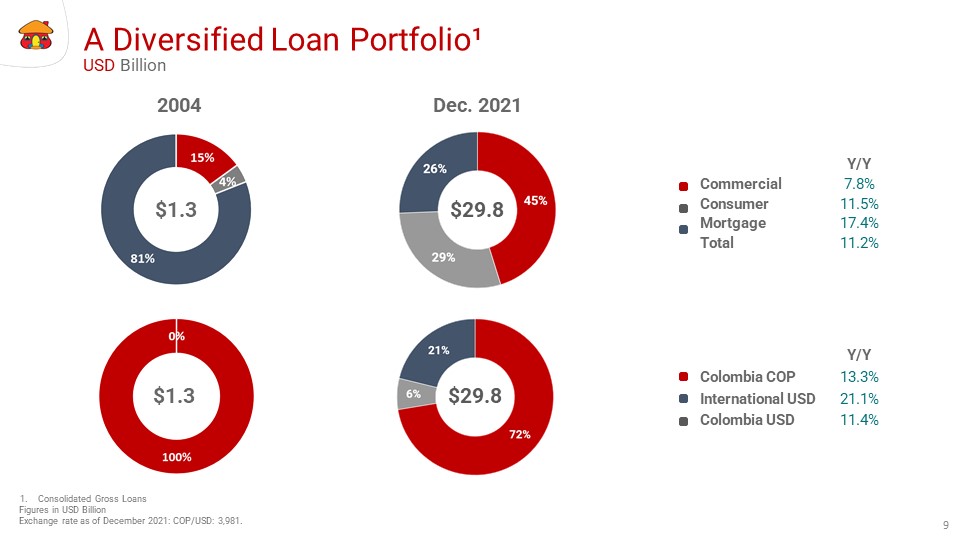 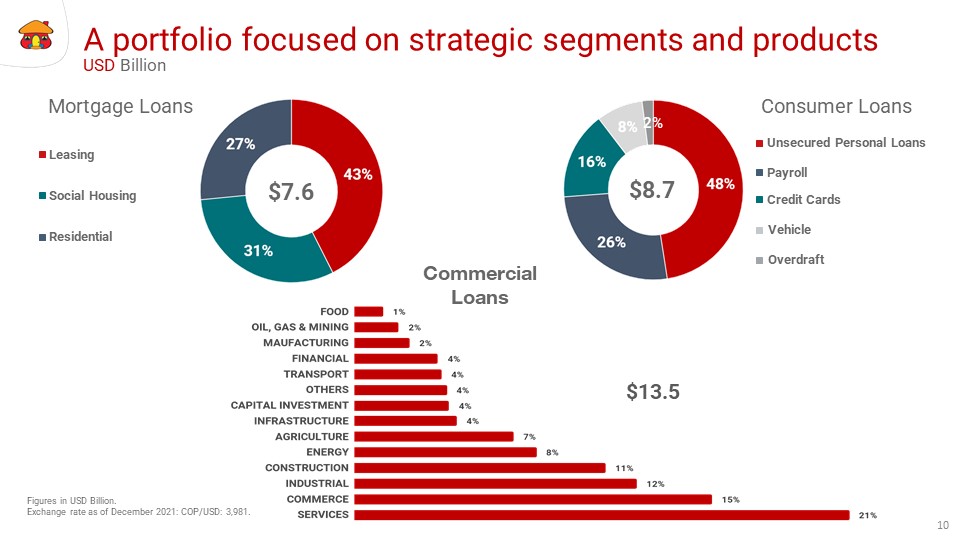 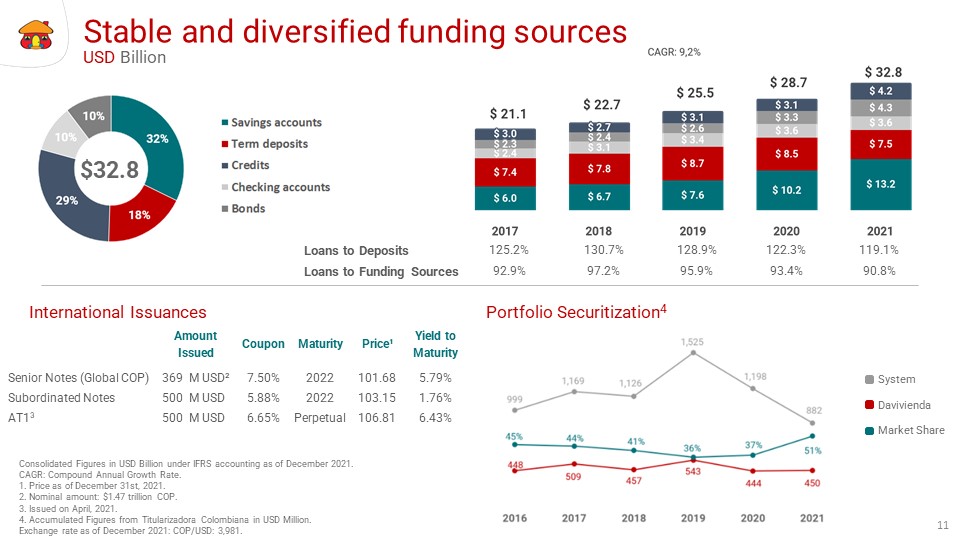 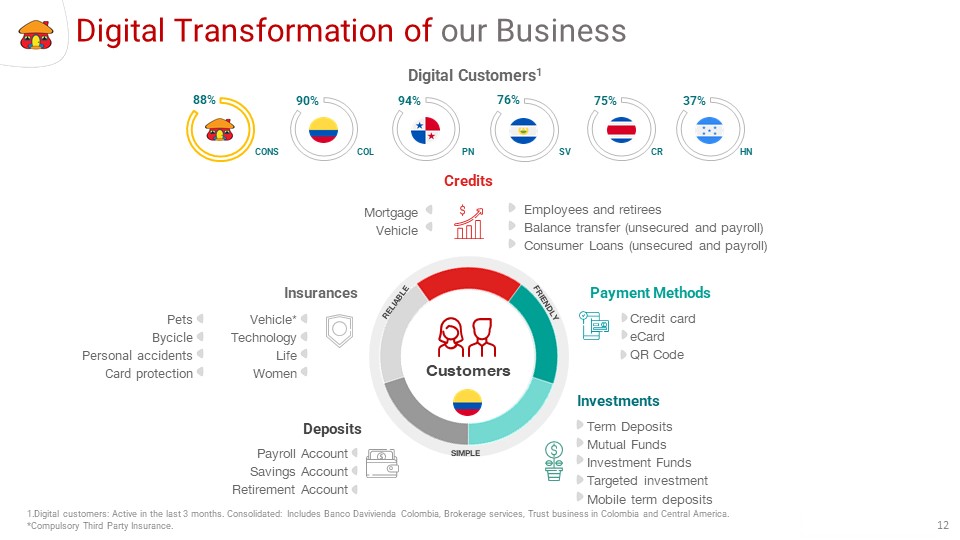 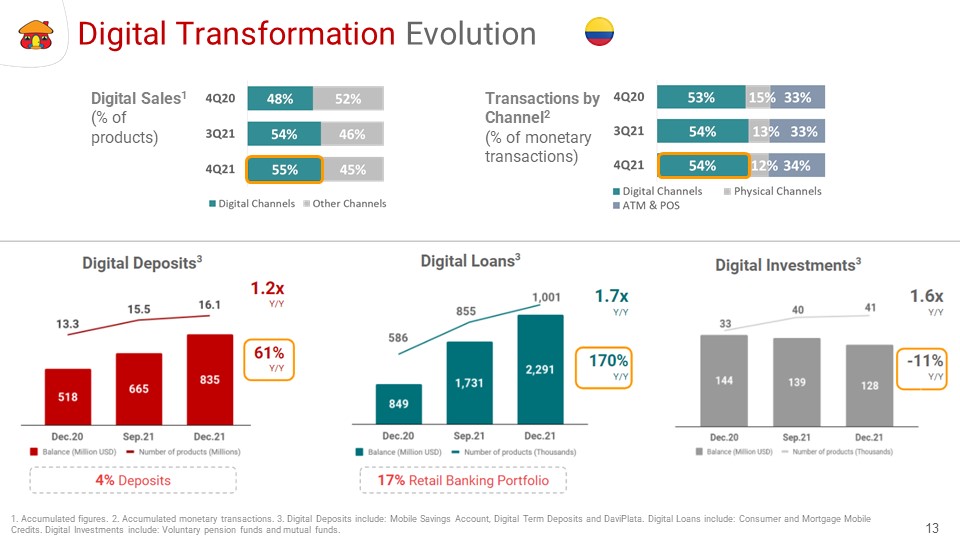 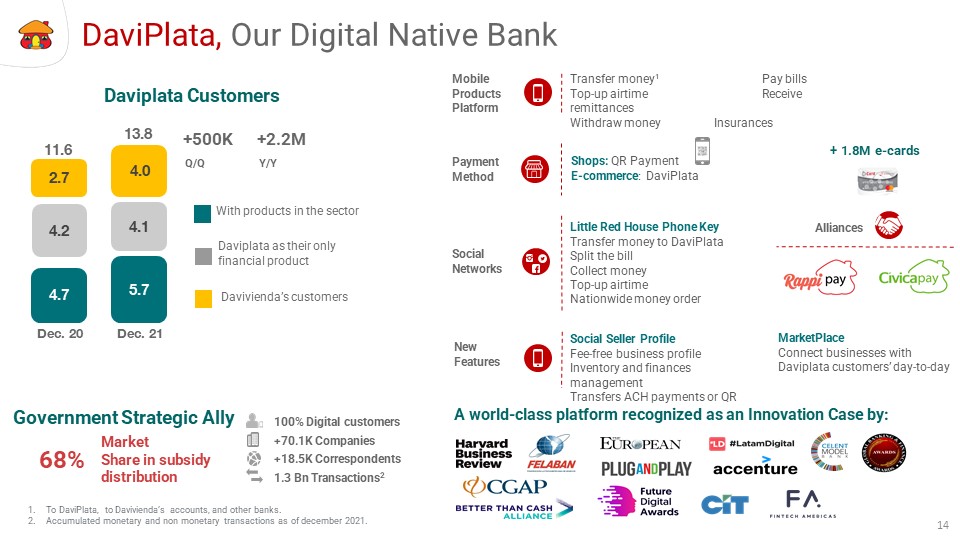 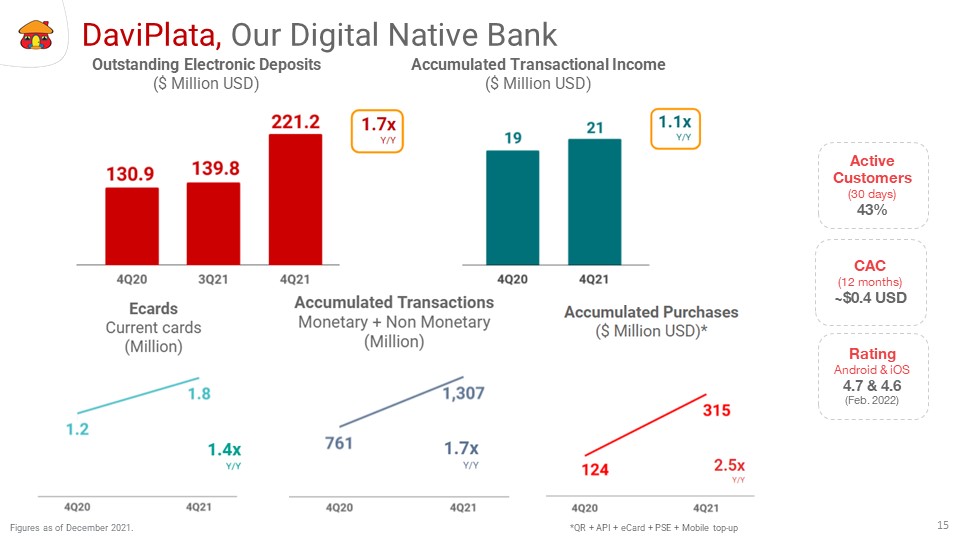 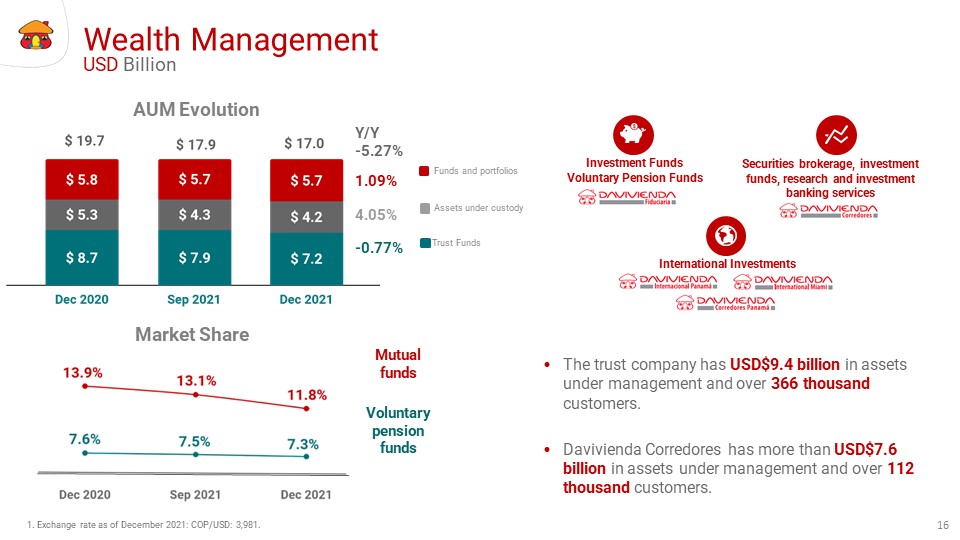 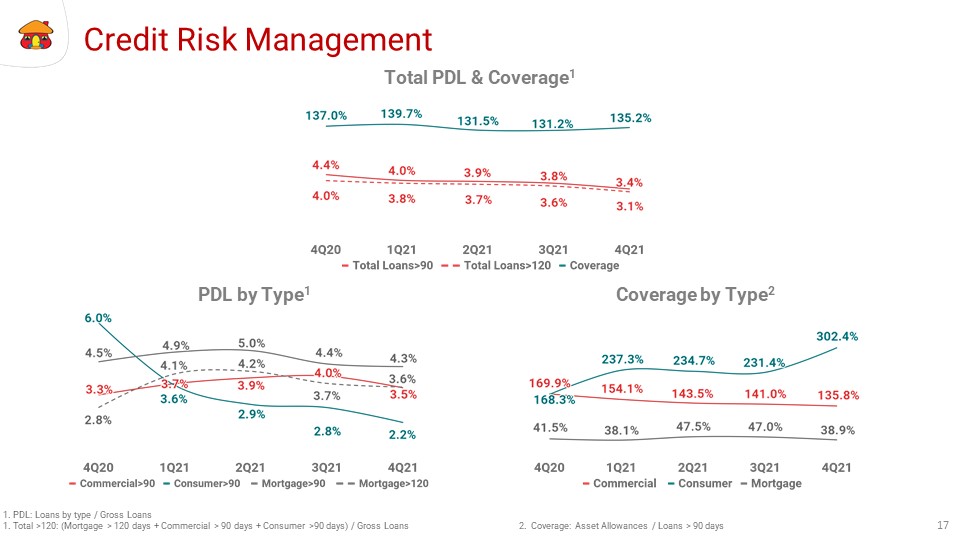 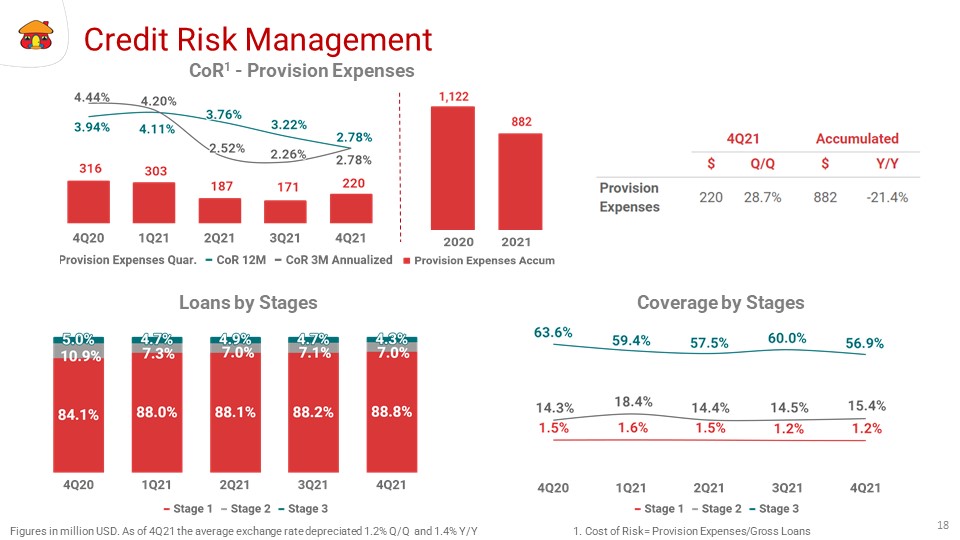 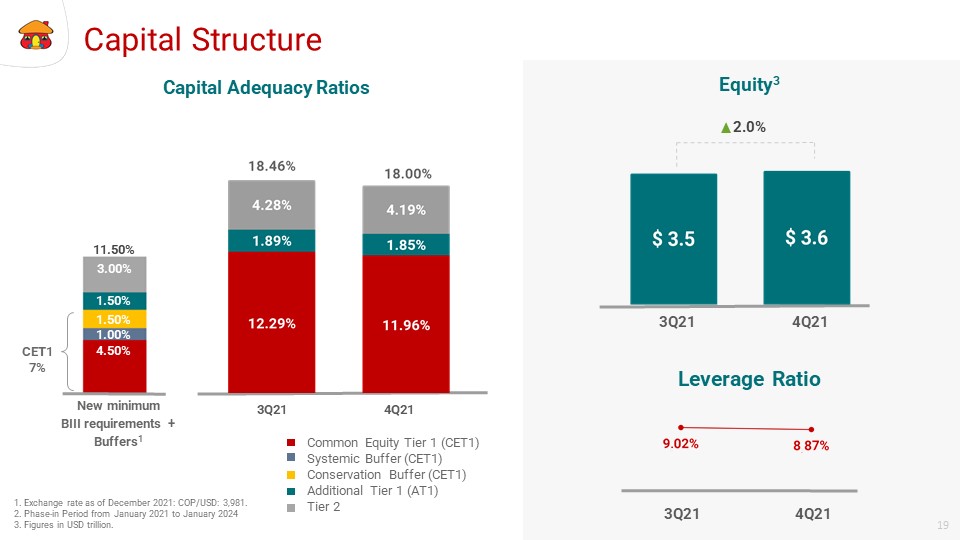 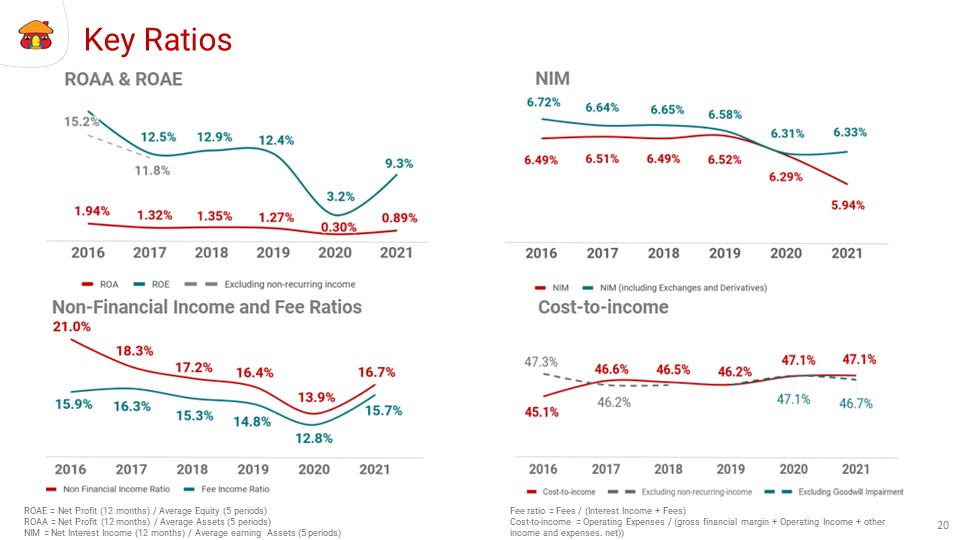 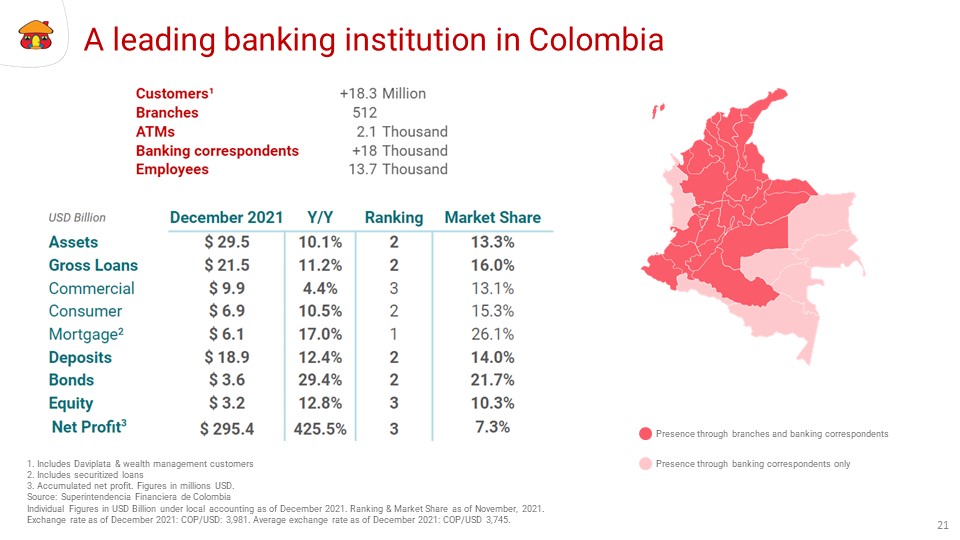 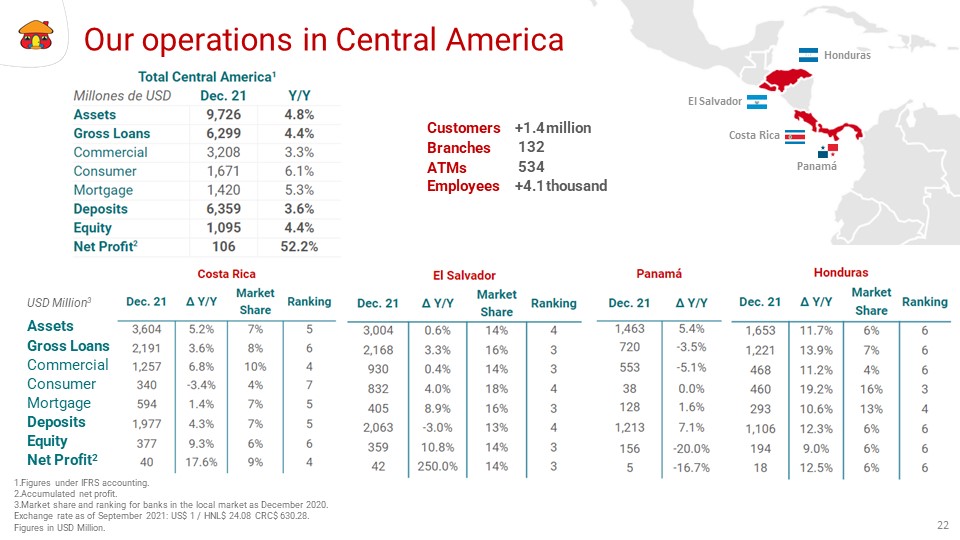 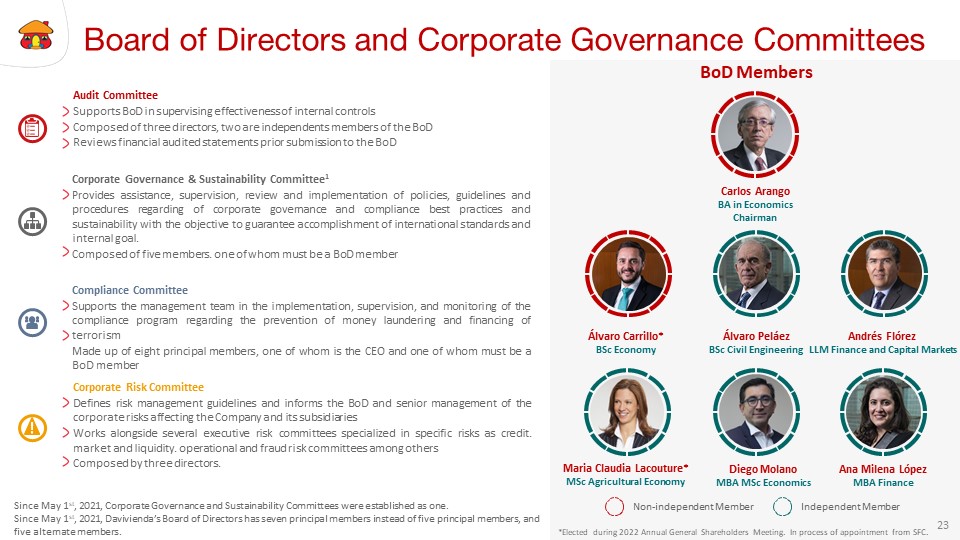 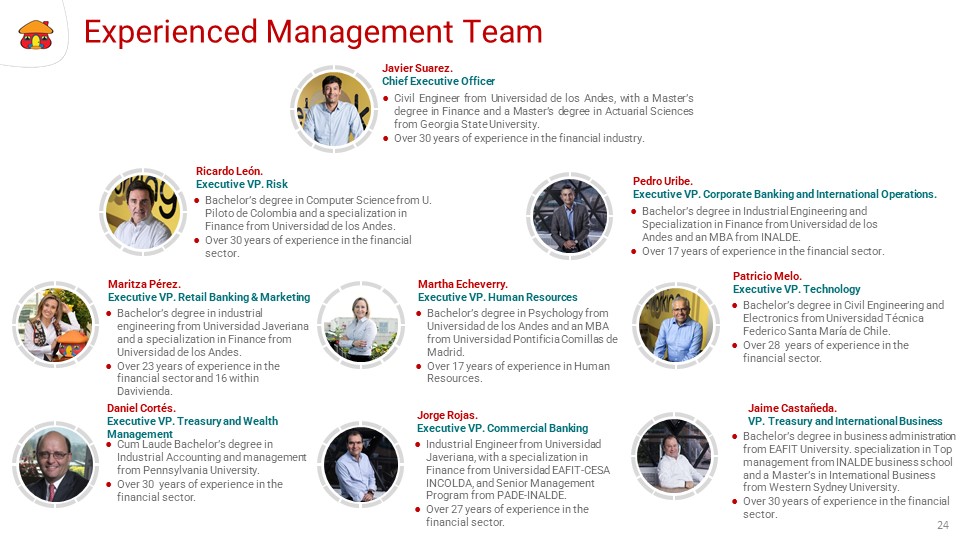 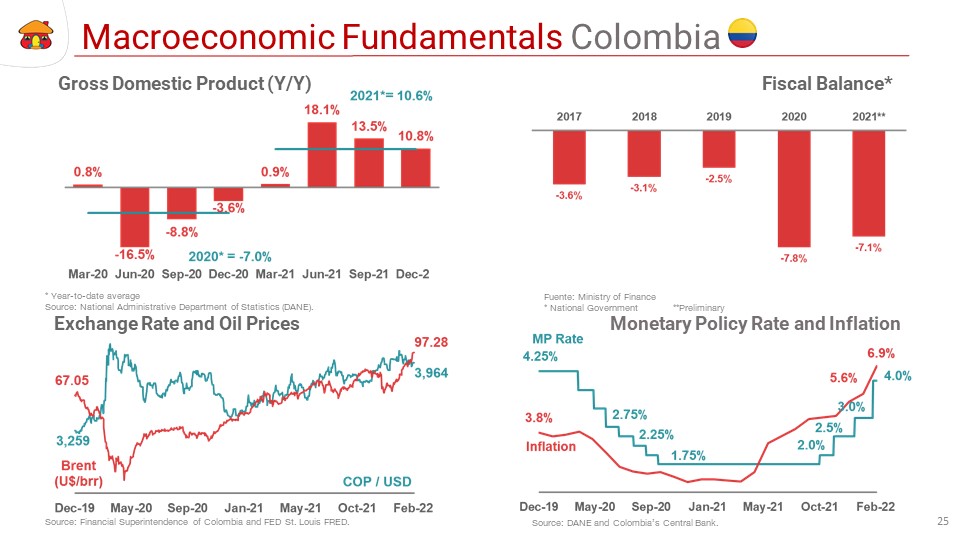 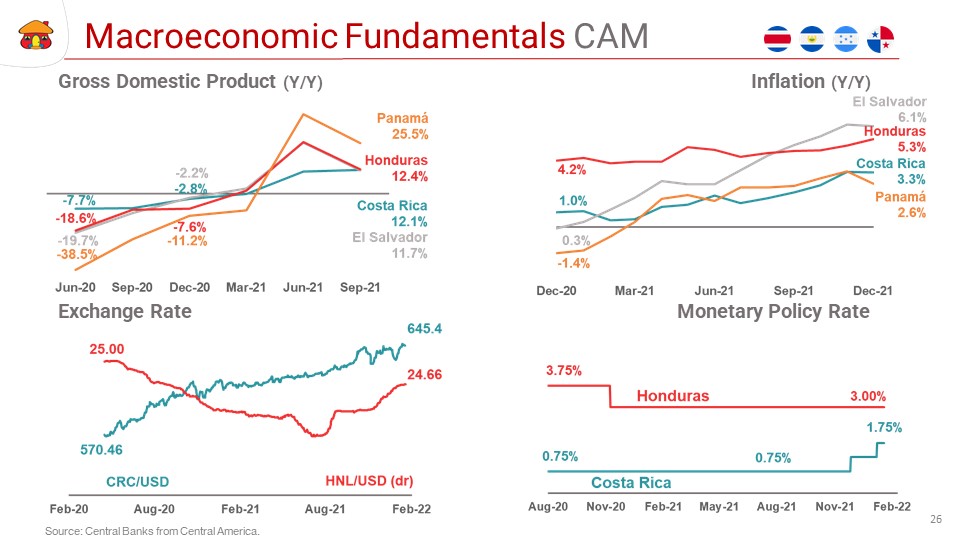 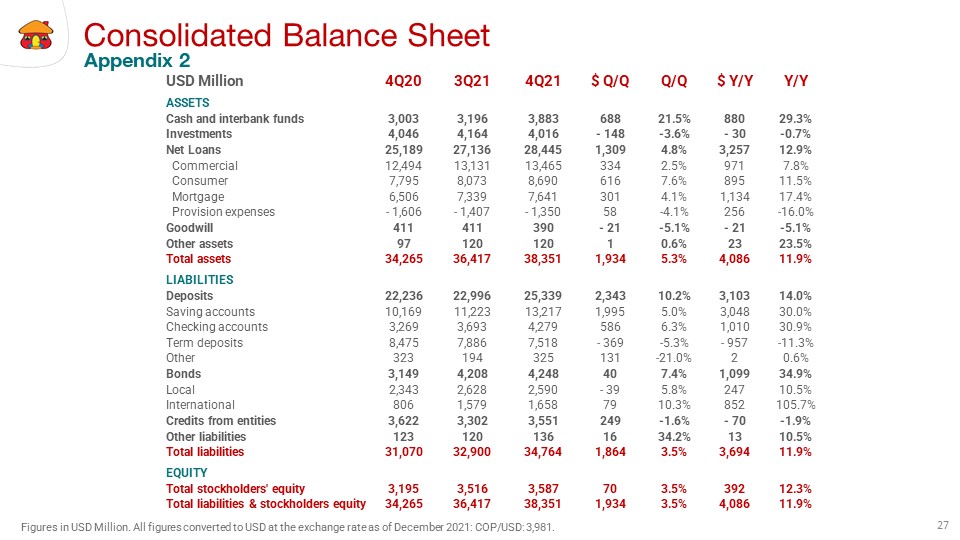 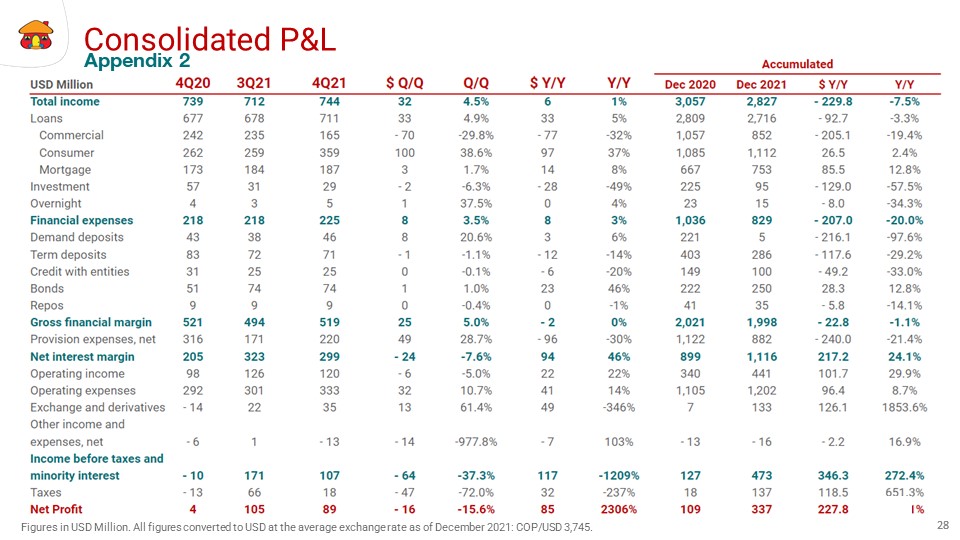 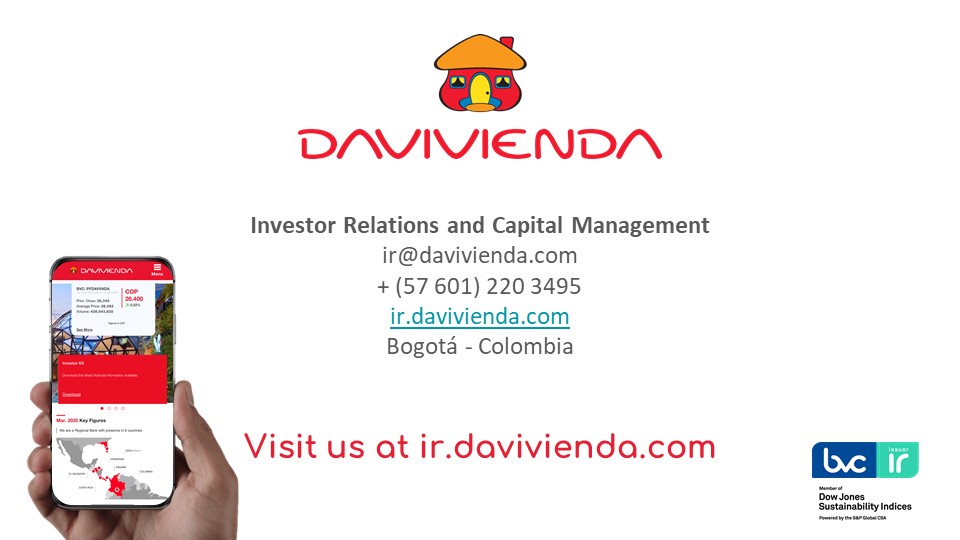 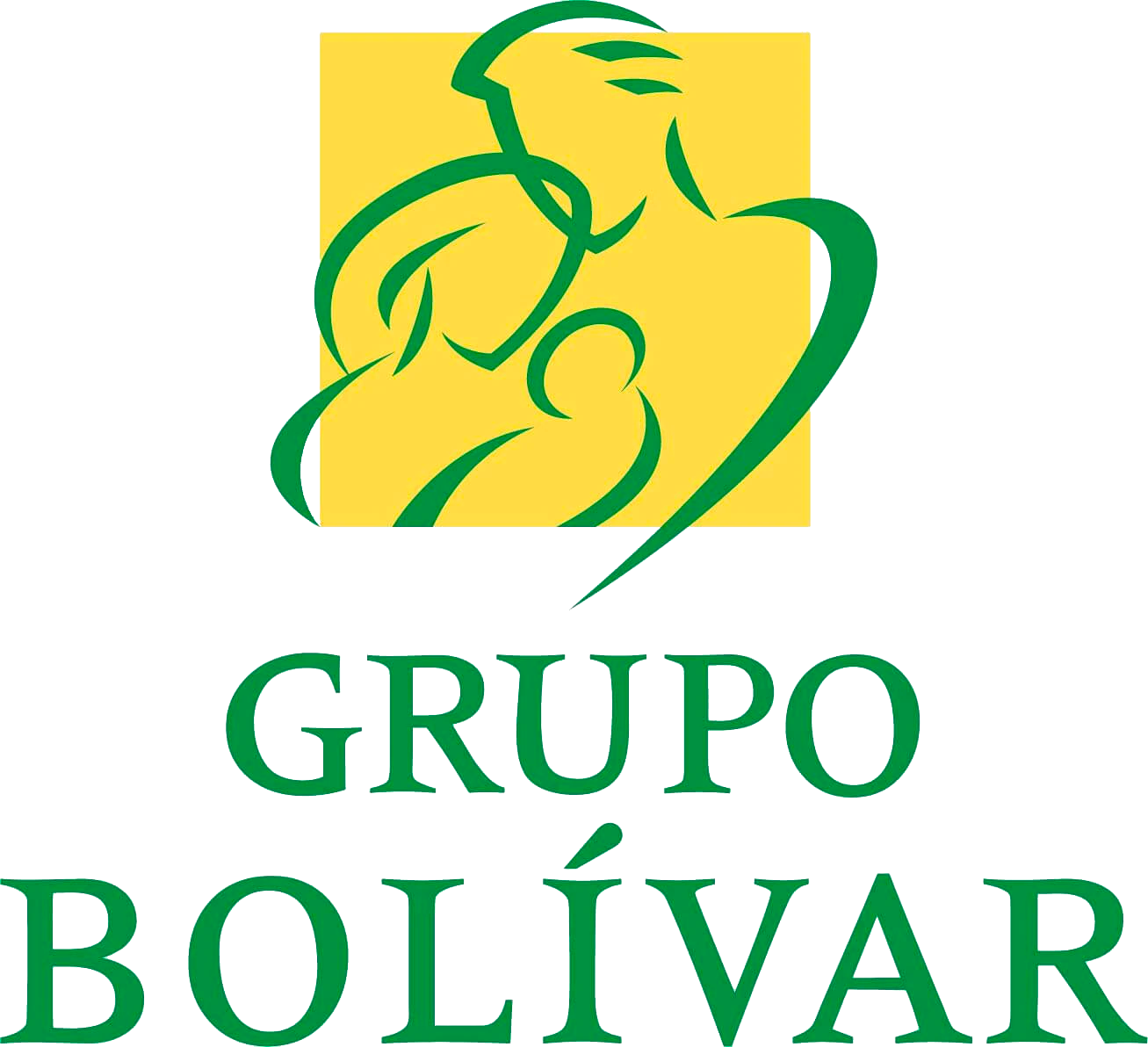 Banco Davivienda is owned by Grupo Empresarial Bolívar. A regional holding with more than 80 years of experience in the insurance, banking, and building industries.  Learn more about the group

Davivienda has over 49 years of experience creating value-added to people and companies throughout Colombia and Central America.

The Bank merged with Leasing Bolívar S.A. and increased its value offer to SME customers.

Davivienda acquired HSBC operations in Costa Rica, Honduras, and El Salvador, which strengthened its regional presence in the Americas.

Davivienda announced a follow-on offering on the Colombian Stock Exchange.

Davivienda announced its IPO in the Colombian Stock Exchange.

Davivienda acquired Granbanco S.A./Bancafé and increased its commercial portfolio services along with its international presence expanding to Panama and Miami.

Davivienda turned into a commercial bank under the name of Banco Davivienda S.A. and focused on its consolidation in the Colombian financial sector.

We seek to deliver simple, reliable, and friendly experiences to our customers. In order to achieve this goal, we rely on a team that develops a value offer based on innovation, risk management, efficiency, and synergy between business lines.

about our management model

We seek to deliver simple, reliable, and friendly experiences to our customers. In order to achieve this goal, we rely on a team that develops a value offer based on innovation, risk management, efficiency, and synergy between business lines.

Here at Davivienda, we strive to achieve the superior purpose we share with all Grupo Bolívar’s companies. Our organizational culture flourishes around seven principles and values: Respect Equity Honesty Discipline Enthusiasm Joy Cheerfulness.

A culture that unites all Grupo Bolívar’s companies

Our culture has enabled us to support peoples well-being, the construction of families wealth, the development of companies and the financing of projects contributing to the countries where the Bank operates.

We generate value to our customers, community and investors through a work team full of integrity, commitment, fellowship and always willing to learn.

For Davivienda, the strategic objectives are the objectives that the Bank intends to achieve with which it will generate greater value for its stakeholders. For this reason we have defined the following objectives:

We impact positively on society and the environment beyond our operation in the countries we serve.

We are a digital organization by nature. Davivienda is an agile and flexible innovator that makes our customers’ lives easier.

We gather the best team and strengthen their skills to achieve the best possible outcomes.

As we innovate and optimize processes, we attain what we set out to do, ensuring the best use of resources at the lowest cost.

Better customer experience and service among all our channels

We are a digital organization by nature. Our innovative, agile, and flexible mindset is oriented to make our customers’ life easier.

A key leader in Corporate Banking

We will focus on developing tailored advice to SMEs.

We look to become our customers’ first choice to manage their equity within a multinational portfolio offer.

At Grupo Bolívar, we have consolidated an Innovation Model based on innovation as a cornerstone within our organization to design simple, reliable, and friendly experiences for our customers.

We have developed an Innovation Culture based on strengthening our staff’s capabilities and skills within Innovation Ecosystems (Startups, Universities, Companies from other industries, Government and World-class Partners).

In 2018 we officially opened Domo I, Grupo Bolivar’s innovation center seeking to develop:

DaviPlata was launched in February 2011 as a cash management service in Colombia.

DaviPlata is the digital solution that democratized access to financial services by leveraging the potential of mobile phones. DaviPlata was the first platform that enabled anyone in Colombia to:

Today, DaviPlata is more than a convenient payment system. Our wallet is linked to partner companies enhancing their value-added strategies for everyone who interacts with them.

DaviPlata has expanded beyond Colombian borders and is now also in El Salvador, where it has grown hand-in-hand with the Financial Inclusion Law, fostering the use of electronic deposits and simplified accounts in the country.

The Casita Roja feature made Davivienda win the international Model Bank award in 2018 in the Consumer Channel Innovation category. While our customers are on their social media, they can transfer money, split checks, or add credit to prepaid cell phone plans.

Davivienda is risk-rated under national and international standards.

About our Board of Directors